So I just got back from watching the new ’21 Jump Street’ at my local cinema.

for those of you who don’t know, this film is actually a “remake” of a tv-show from the 80’s. In its original incarnation, it looked like this: 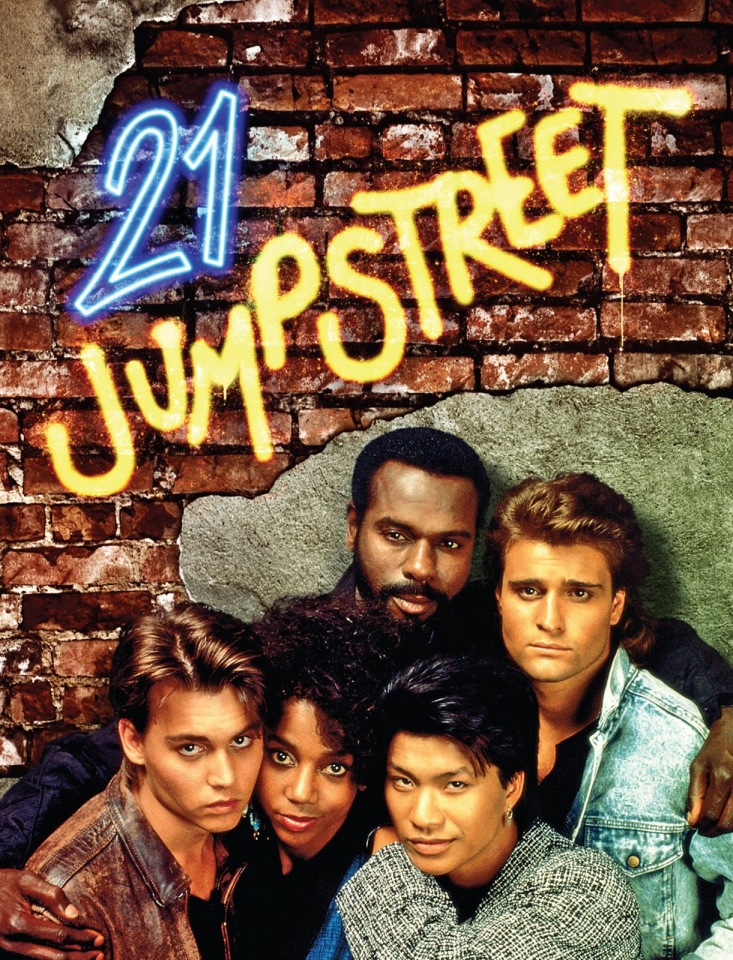 Does something stand out to you? Maybe a particular person? Maybe a particular handsome person? Maybe a particular handsome person who is now one of the worlds most famous male film stars. That’s right, Mr. John Christopher Depp II was first introduced to the world through the magic of 80’s television. Actually, that’s not true. You cine-literates out there will know that the first film to feature Mr. Depp was really ‘A Nightmare on Elm Street’ from 1984. Oh, by the way, I do realise that there are some other people in this picture too, but we both know no one cares about them or their careers.

The premise of the original show was that police officers were sent into high-school, undercover, in order to infiltrate drug circles etc. Oh, the hilarity.

I will admit that I have never seen the original show, though I was aware of it prior to seeing the film. I wasn’t alive during the mid-80’s, true, but I still managed to catch up with shows like ‘Cheers’. I guess this is the one that got away. It’s weird, but I can’t seem to find anyone else who’s seen it either. Strange. Still, Hollywood felt the need to remake it and revamp it completely. By the way, if you did watch the show in the 80’s: CONGRATULATIONS…            …you’re old.

This new version features Johan Hill and Channing Tatum. They are cast in the roles of “geekhead” and “meathead”. Although, since it’s Jonah Hill it’s more like “meathead” and “taller meathead”. I don’t know, I guess after all the loser comedy roles he’s played I just can’t believe him as a nerd. However, Channing Tatum as a “stupid jock”? Way ahead of you. So the casting kinda half-works. Not great, but not bad either. I’m going to give you the trailer for the film now. I want you to watch it, and then listen to what I have to say afterwards:

The film is not that stupid. The trailer makes it out to be all “partyhard” and “drugs are trippy”. It’s almost not like that at all. The drug scenes are actually used in a very intelligent manner to push the story forward, and the party scenes are used to drive a wedge between the characters. I was pleasantly surprised by this film. It’s actually good. Okay, it’s not great. It didn’t have me lying on the floor in stitches of laughter, but I did laugh. For a grumpy soul like me that’s an achievement.

The best thing about this film is how it manages to create a believable solid friendship. The first half of the film seemed ploddingly conventional, but it picked up, and by the end it had me. These two characters get to re-live high school all over again. It’s an opportunity we’ve all fantasised about. Admit it, if you had the chance you’d do it. We all would. Think how much cooler you’d be. Think how “above the clique social structure” you’d be.  Except, you wouldn’t. As the characters discover; humanity is humanity regardless of its setting or its age. The film actually has life lessons and a plot which wraps around neatly by the end.

In addition, there are several in-jokes about the ridiculousness of the entire concept of the movie. Look out for them, cause they’re funny when you get them. Speaking of looking out for things, watch for a few cameos from the original cast members. Memorise the poster above so you can spot them when they turn up. That said, there’s one that you obviously won’t miss.

There’s a character in this movie called “Jr. Jr” played by an actress called Rye Rye.