Hmmm. Ok, so this is Tim Burton’s adaptation of the 1966 – 1971 gothic soap opera Dark Shadows. I had never heard of this show. Have you? Really? My god! You should be in a museum somewhere.

I decided to click around and trace its origins. This is what I found:

And somehow that turned into this:

I have to say that this movie disappointed me. It’s not terrible, though. In fact there’s a certain degree of fun to be had in watching the lavishly over-the-top stunts, effects, costumes, set pieces, and frankly…plot. It’s certainly gothic, I’ll give it that, and pays tribute to the Bela Lugosi/Christopher Lee era of vampirism that has been washed away lately amidst the scum of “team-Edward”. It’s therefore dolorously regrettable that an attempt to reconnect with the true nature of gothic fiction failed so miserably. I said at the beginning of this paragraph that it wasn’t terrible, and I’m sticking to that, but I mean “what the hell?”.

The last twenty-or-so minutes of this film are confusion at it’s most distilled. Characters reveal things about themselves that no one ever knew, expected, or cared about. It’s like the writers realised that they’d left huge plot threads of the show out and attempted to jam them in before the credits. I don’t want to spoil anything, but the sort of things which I’m not meant to spoil have no bearing on the story thus far so to what extent are they spoilers? Aargh!

Before watching it I saw and heard a lot of critics waving their hands up in the air saying “uh…I…don’t…I mean…what is this film supposed to be?”. I didn’t understand their stupor then, but I do now. If the things I’ve said so far were hard to understand, they won’t be after you’ve seen it. There really isn’t any other way to explain this film other than that it’s trying to be a bit of everything.

Imagine a pie that’s mixing blueberry, apple, and strawberry, but just ends up tasting like dough-covered fruit. That is this film. It’s not a comedy, horror, drama, or anything else. What it is…is a film. Just a film with Johnny Depp as a vampire, that’s directed by Tim Burton. In fact it’s like you typed “the next Tim Burton Johnny Depp collaboration” into a simulator and this is what it shat out.

I’m not utterly displeased with the duo at this point, but after Alice in Wonderland and this I’m getting worried. Hopefully their next passion project will be something entirely original. 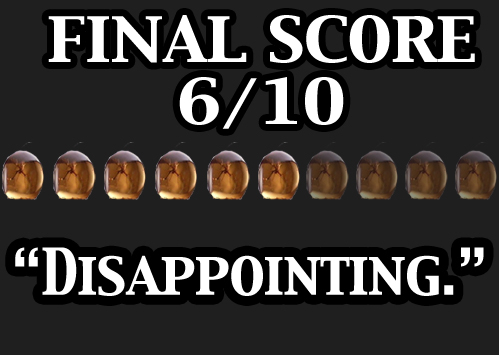