But a list about what? Hmm. I want it to be something people can learn from, a teaching tool for the next generation. What does this generation like? Oh I know…vampires!

So I’m not going to harp on too long about the Twilight movies. They’re awful! You know they’re awful, I know they’re awful, let’s just agree to agree with me…for ever and for all time. Now, I’m actually not a big fan of vampire films in general, I’m more of a zombie devotee. Still, it doesn’t mean that I don’t have my favourites. So, let’s go through them. I hope all you 14 year old girls out there are paying attention, cause you’re about to learn summin’.

I should say, right off the bat, that I’m not going to be listing “golden oldies” like Nosferatu. I agree that these movies are the classic foundations on which the vampire and horror genres were built. Don’t think that I don’t appreciate these movies, I certainly do. However, the vampire films that I truly enjoy are far more trashy. What some of them lack in substance they more than make up for in style. So let’s start at the bottom… 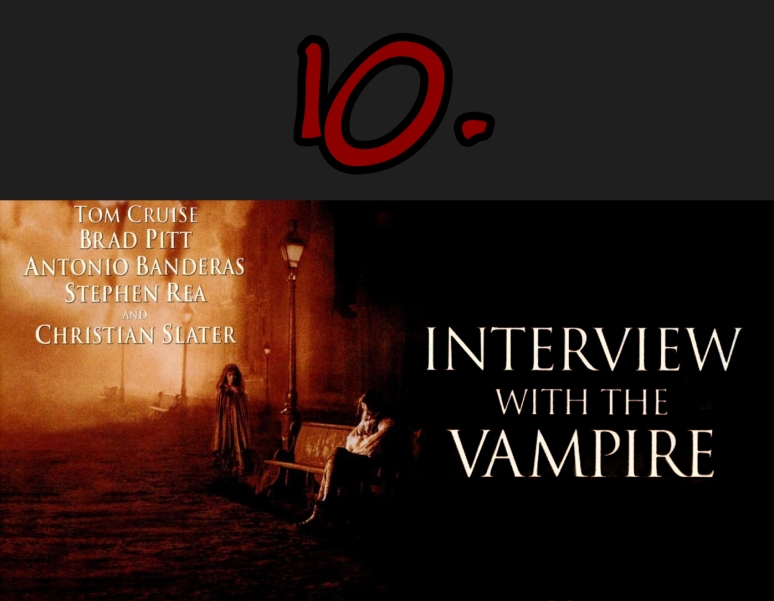 I know a lot of people would put this as their number one, but I’m afraid I just don’t feel that way about it. There are too many flaws in this film for that. It’s very long, too slow, and very overdone. Now, I’m not usually someone who’s put off by corny performances, but there’s something about the acting in this movie that just irks me. I can’t get with it. The actors just look like they’re in a school play, displaying fake teeth and even faker accents. So why is this even in my top ten?

Well, the core idea of the film is a good one. A vampire formulating his own autobiography is an alluring concept. The movie also taps into one of the more interesting aspects of vampirism; immortality. What happens when you live a bicentennial life? What toll does it take on your sanity? I recommend the movie, but with several warnings. It may not be entirely to your liking, as it’s only just halfway towards mine.

“After an Alaskan town is plunged into darkness for a month, it is attacked by a bloodthirsty gang of vampires.”

Remember how I talked about style over substance? Well, here is a perfect example. This movie has an interesting, yet short lived premise, but jesus it’s fun to watch!

Nihilistic to say the least, this film never lets up. It just gets darker and more hardcore as it goes on. The point at which creepy vampire children are fought off with axes, is when you realise you’re watching something totally badass. How’s that for an endorsement? “Totally badass!”, they should put it on the poster. 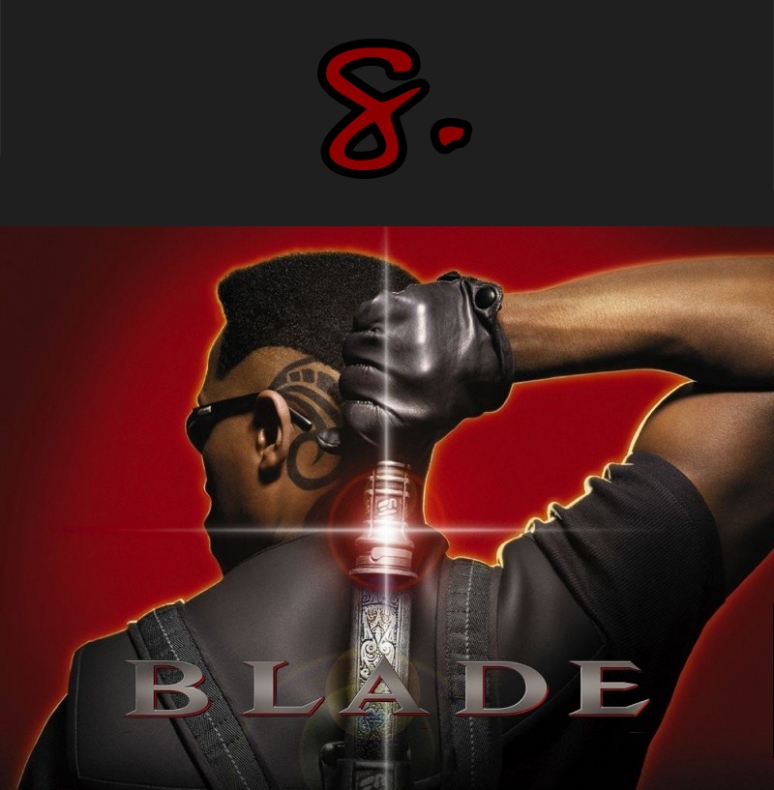 “A half-vampire, half-mortal man becomes a protector of the mortal race, while slaying evil vampires.”

Much like Interview With The Vampire, there are a lot of things wrong with Blade. I’m not going to pretend like it’s that great of a film. In fact there are some sections of it that are outright bad, but this is subsequently balanced out. There is one thing this movie has that surpasses every other vampire movie ever made. What is it?

The opening scene of this movie is unsurmountable. No vampire film has ever come close to it, including the entire rest of this list. The following 20 minutes or so are very good, and the last hour and a half are not so great. Basically it deteriorates as it goes on and the ending is super-stupid. Still, that beginning is so crucially awesome that I’ve taken the liberty of providing you with an HD youtube link. Don’t get me wrong, I still think you should watch the rest of the movie. Who knows, you may like it. But for now, enjoy:

“A teenager suspects that his new neighbor is a vampire.”

I had mixed feelings about the upcoming remake of Fright Night. With the knowledge that it was being crafted as another in a long series of Twilight-fan appeasement films, I knew the results could be disastrous. That’s why I was so pleasantly surprised when it turned out to be a a lot of fun. Although it was clearly green lit by the producers with the intent to capitalise on the “vampire craze”, the filmmakers themselves knew exactly what they had to do in order to distance it from that phenomenon. They gave their film a unique look, setting, and characterisation. It really does set itself apart from a lot of modern vampire film by virtue of the fact that it’s splashy. The gore begins to pile on about halfway through the film and doesn’t let up. Add to that a bit of David Tennant, a failure at the box office, and you have all the ingredients for a cult hit (just like the original was). 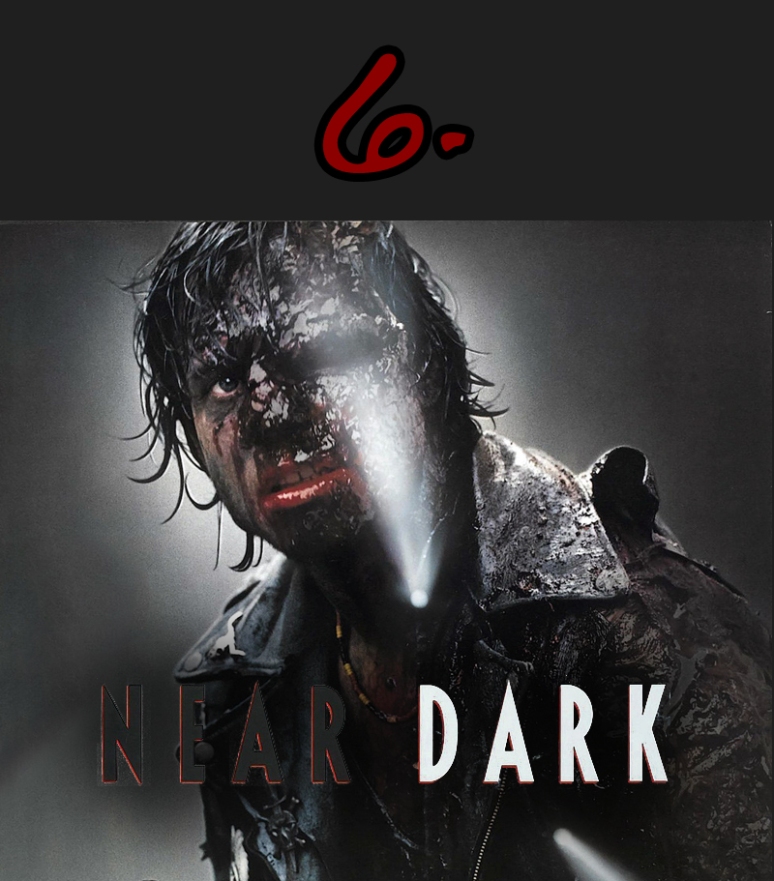 “A young man reluctantly joins a travelling “family” of evil vampires, when the girl he’d tried to seduce is part of that group.”

There’s something quite unique about Near Dark. It has that 1980’s ripped leather Terminator look, mixed with a wide open rural landscape. Its oddball characters also give it a special charm, featuring vampires that are having to make-do with their cursed lives. We see them taping up windows and stowing away in a camper van during the day. It even features a Twilight-esque love story. Oh, no wait, it’s not Twilight-esque…because it’s not lame. Sorry, I said I wouldn’t harp on about Twilight.I guess I just can’t help myself.

All the cast give fine performances and the effects are rich in 80’s gloss. Love it or hate it, Near Dark certainly stays with you, and for that it deserves the number six spot. 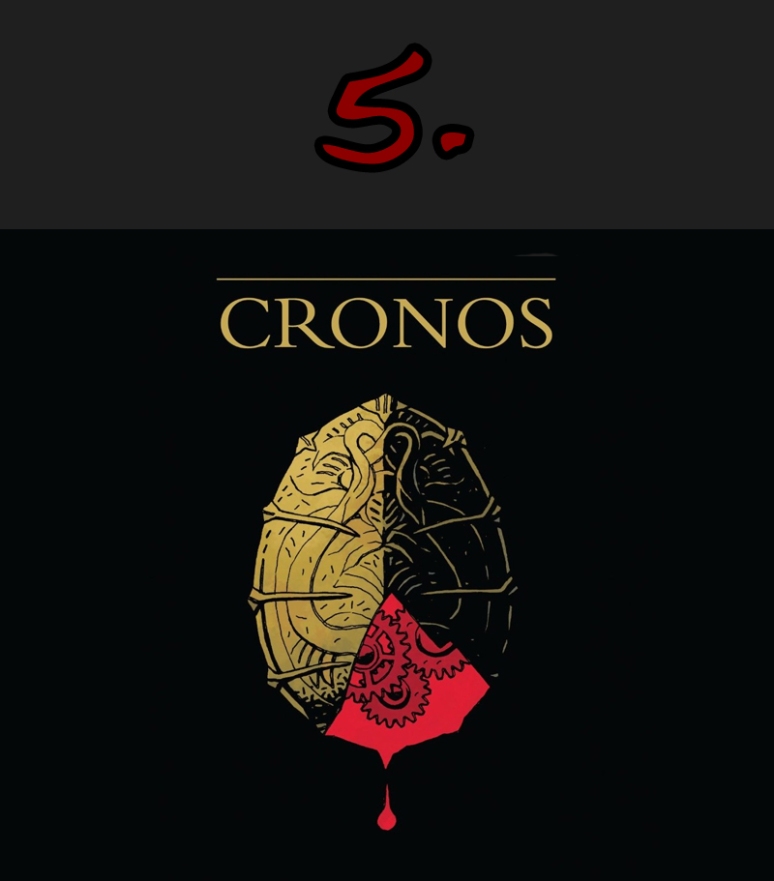 “An aging antique dealer named Jesus Gris happens upon an elegant mechanized scarab. When opened, it painfully stabs whomever is holding it, but the wound brings youthful vigor and a vampire’s need for blood.”

The packaging might be plain, but the film isn’t.

It is particularly noteworthy for its intentional 180° turn on the entire sub-theme of vampirism. For those who are unaware; vampirism is a metaphor for sexual lust. Always has been, always will be. The desire to “defile” your lover (usually a beautiful pure woman) for your own self satisfaction, and the possibility of that completely corrupting her very existence, lives at the heart of the vampire’s story. In this film, however, it does not. Guillermo Del Toro set out to create a vampire film with no sexual undertones whatsoever. It’s an interesting idea, and made for an incredibly beautiful movie.

I’m sure most of you who have heard of this movie will be sick of listening to how genius it is. I’m afraid I won’t be challenging that notion, it is pretty fuckin’ good.

What’s so good about it? It’s scandinavian. That might sound like a bizarre compliment, but it lends a special atmosphere to the film. Dark skies and white snow bring you into the simplistic turmoil the main character is feeling.

There’s a remake called Let Me In. Don’t watch it, it’s terrible, just typical American corporate crap, capitalising on the creativity of European artists and the english-speaking publics refusal to read subtitles.

This may seem like cheating, but both Fright Night movies really are good enough to make the grade. The remake was great, but the 1985 original is still better. It’s not even limited to being a vampire movie, since it features zombies and werewolves as well. that’s exactly what I love about it; it just wants you to have fun. Ripe with 80’s gore, it’s a feast for you bloodhounds out there…if you can deal with some of the cheesy line deliveries.

“Blade forms an uneasy alliance with the vampire council in order to combat the Reaper vampires who feed on regular vampires.”

Remember, at the beginning of this list, how I talked about Blade? Well, there’s a sequel, and it’s astonishing! Who made it? Who else but; Guillermo Del Toro.

The Blade movies are based on comic books, so the visual style tends to emulates that. The original Blade went for a more noir look. Guillermo decided to brighten this one up, add more colours and lights. I have to admit, I prefer the style of the first film, but this one has a much better story. Vampires fighting vampires, and a ‘daywalker’ caught in the middle? Love it. The best thing, however is the production design. That’s no surprise, coming from Del Toro, but I honestly think Blade 2 is one of his best designed film. Bone-crunching action and gut-spilling bloodshed, it’s a blast. 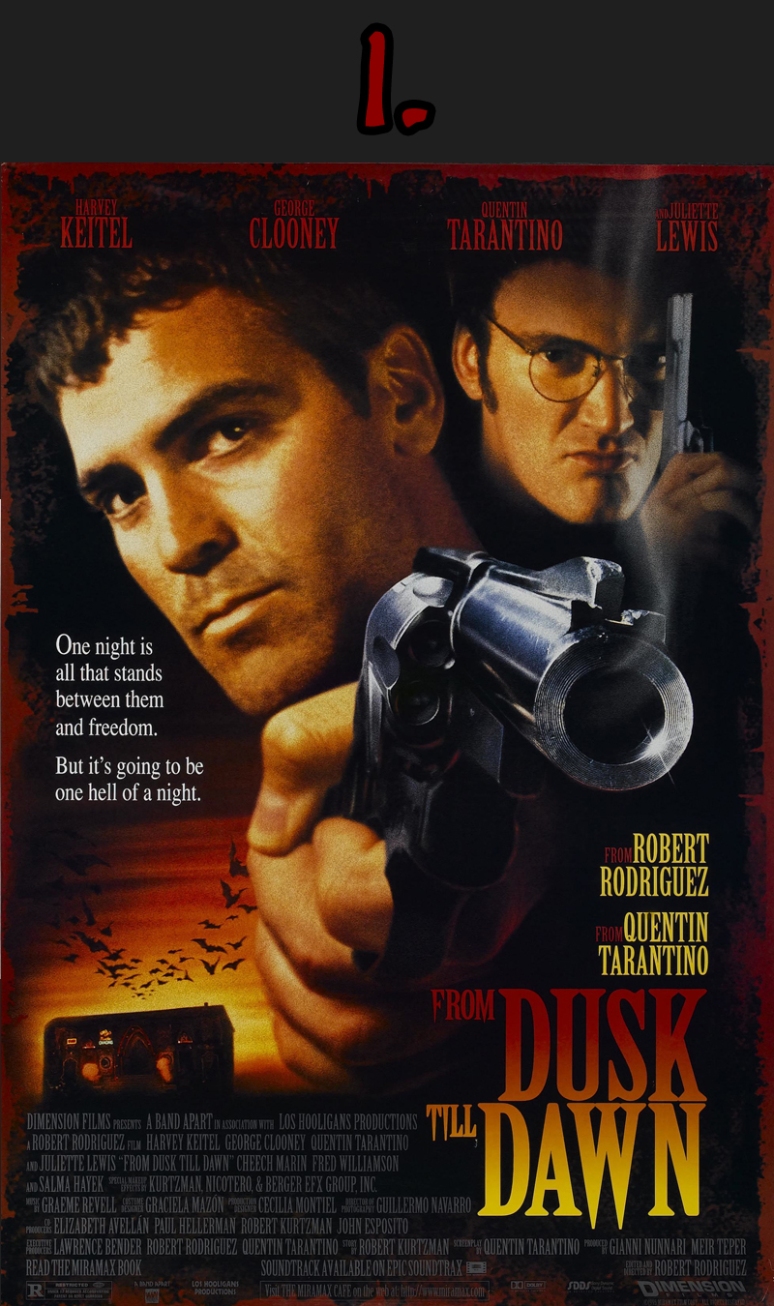 “Two criminals and their hostages unknowingly seek temporary refuge in an establishment populated by vampires, with chaotic results.”

And there it is! The best vampire movie ever made. Written by Quentin Tarantino and directed by Robert Rodrigues, it’s the perfect combination of elements. Tongue in cheek humour, crime, sex, cops, robbers, strippers, George Clooney, Harvey Keitel, Salma Hayek, Cheech Marin, and Danny fuckin’ Trejo – what’s not to like? To say this movie doesn’t take itself seriously is the world’s biggest understatement. It doesn’t give a shit about you either, it just powers through!

A lot of people have noted that the structure of this film suggests a halfway-point copout. The movie starts with two brothers-in-crime fleeing the country into Mexico, and then 45 minutes into the film it randomly becomes a vampire flick. Ok, I can see why it looks like Quentin Tarantino just ran out of ideas and decided to completely change the narrative. But, isn’t it great to see a film that effectively gives you two movies wrapped into one plot?  The point at which one plot strand begins to turn stale, a fresh one blooms. As with most of these films, the effects are astounding. The vampires have a unique look, reminiscent of the deadites from The Evil Dead, and are just plain freaky to look at. The creativity and sense of play is right there, on screen, the entire time. No other vampire film will give you the shrieks of delight that this one does.

Alright, that’s a pretty solid list, if  I do say so myself. If you feel the need for a vampire fix, go through it and pick one that takes your fancy. It’s my gift to you, aren’t I nice? Naww.