A picture worth a single name

Normally I start off my blog posts with either a bright colourful title or a movie poster in order to let you know, right away, what movie(s) I’m going to tell you about. This time; I’m just putting up this picture.

See, it may sound obvious, but film is a visual medium. That’s an important thing to remember when you stop to contemplate why a particular movie has made an impression on you. It’s often said that the audio is 80% of the experience in a movie, and I can agree with that. We tend to neglect the real impact of words, sound effects, and music – but it’s true that they are majorly responsible for tone and atmosphere. I think, however, that it also depends on the film maker. Some directors are not as visual as they are audible; they prefer the dialogue and music to tell the story. Others put more emphasis on imagery in order to convey things to the audience. Granted, none of this is new, but…

Every so often a film will cut through all the intellectually analytical bullshit and just burn an irreplaceable image into your frontal lobe for the hell of it. Considering the long history of the moving image, it’s quite an achievement. Several movies have done it, but for my money one of the more precious is

holds a special but troublesome place in my heart.

the film is, as

the girl, a beautiful but flawed creation. I remember watching it and thinking “it’s not all that good”, and I’m actually sticking to that. It isn’t a very good film. It’s often badly paced, bizarrely edited, and strangely acted. It’s rich with 1970’s vibe…and not in a good way. But, there is that one scene – that one glorious scene – that left me with the haunting image I’ve presented to you above. It’s something you’ll never forget about. Anyone who’s been exposed to it will instantly recognise it. To me, it stands alongside the greatest of Michelangelo’s or Leonardo Da Vinci’s paintings. Her crimson-draped pose and baneful stare acts as a powerful message from the powerless. She is the anti-madonna, drenched in red and surrounded by the flames of freedom and fury.

a classic because of this image alone. It made the movie what it was, but what it was…was still imperfect. I’ve always felt that, with the exception of that moment, the film was never as good as it could have been. Perhaps, in this single instance, it’s right to call upon evil to fix evil. Maybe it’s appropriate to send a carrier pigeon into the shadowlands and summon the beast itself. We must crack the lid of pandoras box, just this once. We must allow for…a remake! 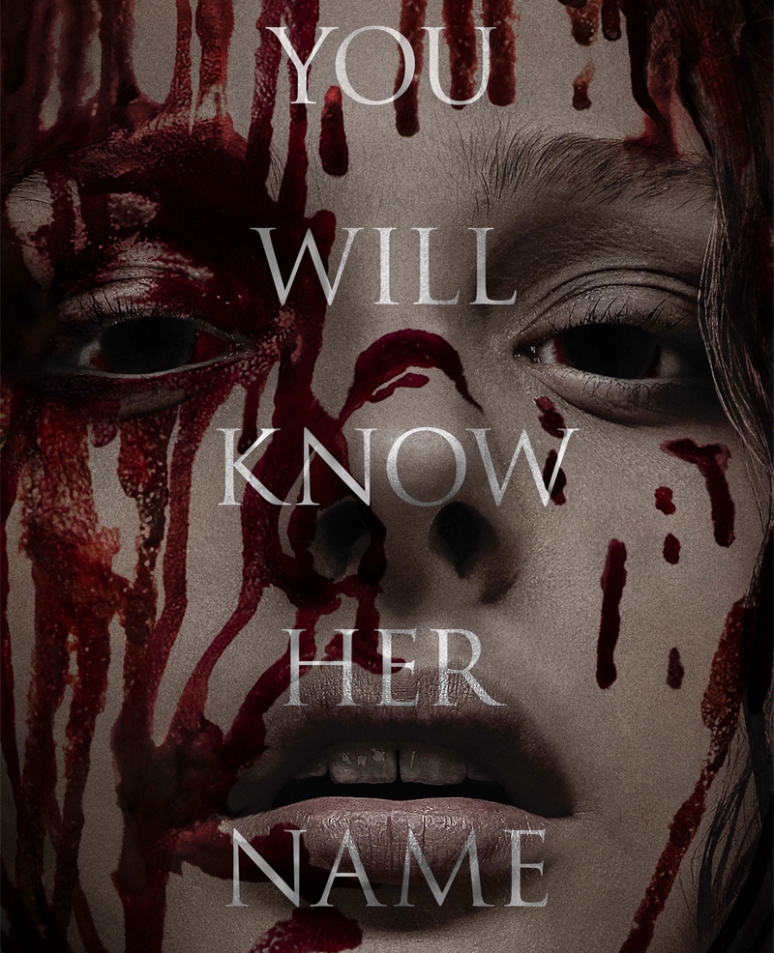 …and if not now, soon. The remake will be released in the spring of next year, and I am pumped for it!

, but I’m willing to give her a chance. Regardless, she pulled enough weight as Hit-Girl in Kick-Ass to give her a few free passes and then some. I still think Sissy Spacek set the bar ridiculously high, so Chloë has her work cut out for her.

As for the director, we have a very surprising choice; Kimberly Peirce. A woman who is primarily known for dramas like Boys Don’t Cry and Stop Loss is now taking on this epic Stephen King masterpiece? What what what? Alright, sure. We’ve had Christopher Nolan directing the Batman remakes, Kenneth Branagh made Thor, and now Sam Mendes is assembling the next James Bond movie – so why not? Perhaps the studios are now all coming to their senses. I’m interested to see what an openly lesbian dramatic director can bring to this story of maternal abuse and teenage inadequacies.

I’m filled with hope over this one, I think it has a good chance of being my favourite adaptation of

ever. The cast and crew announcement worked for me, the poster was intriguing, and now the teaser trailer is here. I hope you’re as excited as I am about…

2 thoughts on “A picture worth a single name”