I am not a woman and my one-on-one experiences with them tend to be…limited, but please don’t write me off as a “tiny ignorant man”. I try to understand women and widen my simplistic male perspective, yet I do have some already formed opinions on them.

Don’t worry your pretty little X-chromosomes though, I promise I’ll be on my best behaviour. I’m not going to objectify the ladies, marginalise the girls, or dismiss the misses. We all know the struggles that women have had to face in the past, the same struggles that many still have to face in certain parts of the world. It’s not something to be taken lightly – and is strange when considering that, biologically, women reign supreme. Not only are they the vessels of life, but all human foetuses are conceived as female and only develop male characteristics at a certain hormonal stage in development. Women could say that men are just testosterone enhanced versions of themselves. On the other hand, men can just turn around and ask women… 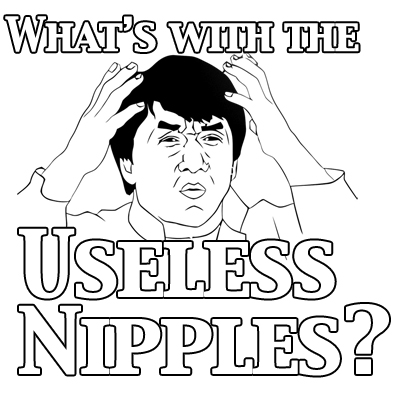 I admit that got a little heavy right around the part where nipples were mentioned. Vestigial organs are also no laughing matter, but that’s a whole other discussion. What I really want to talk about…starts with the late, great, Christopher Hitchens.

See, Hitchens once wrote an article called “Why Women Aren’t Funny” and followed it up with the brilliantly titled “Why Women Still Aren’t Funny”. Now, I agreed with much of what Hitchens wrote and said because, frankly, he was ridiculously smart. Genetically, there are arguable reasons why women tend to be less funny than men. I know it sounds insanely sexist, but it has to do with animal courtship.

That being said, I disagree with the blanket statement that “women aren’t funny”. While men may be more comedically exhibitionistic, there are several examples of funny women out there. I could start listing people like Tina Fey, Whoopi Goldberg, and Ellen DeGeneres, but instead I want to go straight to my trump card… 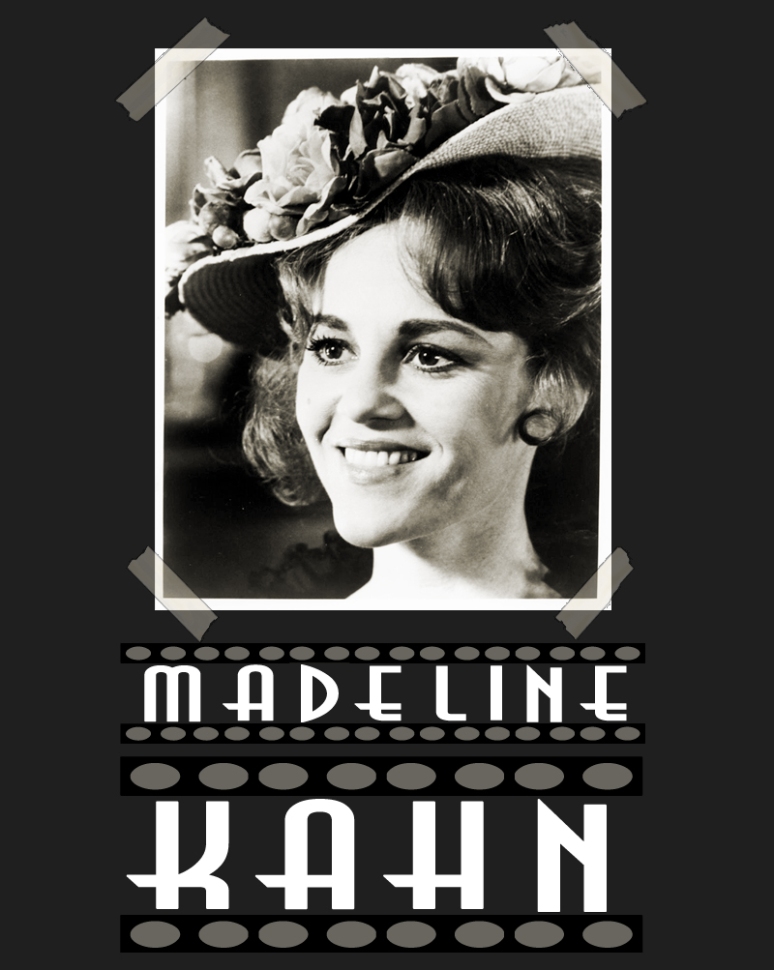 Don’t let the picture and font mislead you, we’re not having to go back to the early 1900’s to find an example of a funny woman. Madeline Kahn was at the height of her career during the 70’s and 80’s, and she wasn’t just a funny woman…she was the funniest!

Madeline is quite probably my favourite female comedic actress of all time. Why? I’m not quite sure, maybe it’s the mix of her irresistible beauty and ability to laugh at herself that does it…or maybe it’s her talent for telling funny “dad-jokes”. Take this skit she had with George Burns for example:

Madeline Kahn: “I hope my girlfriend Rover’s watching this…

George Burns: “You have a girlfriend and her name is Rover?”

George Burns: “How did she happen to get that name?”

Madeline Kahn: “My mother gave it to her.”

Madeline Kahn: “Yes. When she moved in next door my mother said ‘why don’t you call her over?’…so I did.”

Ok, maybe it’s funnier when you hear it…and hear it from Madeline Kahn. Not only was Madeline a comedian and an actress, she was a singer too…

…but I don’t care about that, I know her best from the movies she was in.

There’s a type of humour which largely died somewhere towards the end of the 80’s and has only resurfaced occasionally since then. This genre is hard to define…or name…but Madelyn Kahn was one of the poster-children for it. In honor of that, let’s call it ‘Kahnedy’. Some other examples of Kahnedy include Airplane I and II, the Police Academy films, The Naked Gun films, Robin Hood: Men in Tights, and Three Amigos. Oh, and several of Madeline Kahn’s movies of course.

Mel Brooks is the godfather of Kahnedy and Young Frankenstein (or Fronk-en-steen, as the character insists on being called) is his funniest film. Many would say The Producers….but no, no it’s not.

Madeline plays Elizabeth, Dr. ‘Fronkensteen’s bride-to-be. She is hopelessly in love and cannot bare to be too far away from him…or too close.

Unfortunately Madeline isn’t in this film all that much. Still, while Gene Wilder and Marty Feldman soak up the majority of available screen time, she does make the most of her slice.

I’m willing to admit that I don’t like Blazing Saddles as much as Young Frankenstein, but Blazing Saddles certainly isn’t colourless. In fact it’s the first bit of proper colour on this page, so let’s give it its due.

This film is a loving parody tribute to the Sergio Leone movies of the 50’s and 60’s. Everything, from the aspect ratio to the film stock, is hand picked to invoke the old spaghetti westerns.

Madeline Kahn tends to be remembered mostly for her role in this movie, probably because it’s an example of her voluptuous side. I don’t think it’s the most hilarious thing she’s ever done, but it is a fun little bit of kinkiness. She plays Lili Von Shtupp, a saucy minx who’s promiscuousness is even engraved into her name. The only problem is…she’s so tired of it…

Some of you are now thinking “didn’t he say she was a singer aswell?”. Don’t worry, she’s meant to sing out of key – that’s the point. One can only assume that she “shtupped” her way into fame, a career strategy that has grated her spirits over the years. What will happen when she’s introduced to the first black sheriff of the west? Will it rekindle her flame of lust and excitement? Maybe you’ll have to watch Blazing Saddles if you want to find out…

I could go on endlessly about Clue and how stupidly funny it is…so I will! For those who don’t know and are wondering…yes it’s based on the board game. How good can a board game based movie be, right? Well, turns out it can be great!

The plot of the movie is the plot of the game: Six guests are invited to a strange house and must cooperate with the staff to solve a murder mystery.

I’ll recommend the whole film some other time, for now I want to mention the cast. It’s one of the best casts ever! Christopher Lloyd, Martin Mull, Michael McKean, Eileen Brennan, Tim Curry…and Madeline fucking Kahn of course!

In this one Madeline plays Mrs. White, an ironically named two-timed widow being blackmailed along with all the other house guests. As with the rest of them, she is hiding a lot of secrets. Get in her way, and who knows what may happen to you. You may become her nemesis, and end up being the very flames…flames…on the side of her face…breathing, breath…heathing breaths…

Oh whatever, just watch this clip…

If you ever have a look at the original script for Clue, you’ll find that it reads twice as long as the runtime of the final film. Why the disparity? Well, as you can see, the actors have all ramped up the speed of their dialogue. This not only helps to shorten the overall length, but also increases the joke-to-minute ratio by quite a factor. That single clip is 1 minute 15 seconds long and contains at least 8 jokes., that’s 1 joke every 9.375 seconds…

Ok…I’m getting pointlessly nerdy and mathematical about it, sorry. It’s just an unbelievably enjoyable movie, which Madeline Kahn finally has a solid part in.

Speaking of jokes-per-minute, here is one of the ultimate examples of that.

“The accidental mix up of four identical plaid overnight bags leads to a series of increasingly wild and wacky situations.”

“Wild and wacky? Oh goodness gracious, that sounds splendid!”. Yeah, that description is corny as hell, but the film simply does…not…fail. I love movies like this, with hundreds of characters all running into each other like billiard balls; there’s a musicologist rock collector, an opportunist stalker, a mafia henchman, a whistleblower, a government operative, a corrupt hotel receptionist, an exuberantly rich celebrity dame, and an arrogant competitive writer all caught up in one epic confusion. Oh, there’s also one more role…

…Eunice Burns, the fiance of Howard Bannister, who is of course played by…Madeline Kahn. Eunice is an overly controlling prude who finds herself unable to compete with a scheming free spirited young woman, played by Barbara Streisand, who seemingly makes it her mission to split them up and steal Howard for herself. In terms of the central romance that brews over the course of the movie, Eunice is the closest thing to the film’s villain. In actuality she’s a victim, but because Madeline Kahn plays her as an utterly overbearing nuisance…you just end up laughing when she’s steered straight into oncoming disaster.

Don’t worry, it’s a comedy, so she doesn’t get her legs broken by the mafia or anything. Still, if that clip intrigued you, then you should watch the whole movie. The last movement of “What’s up, Doc?” has one of the longest and most hilarious car chases you’ll ever see. Actually, I shouldn’t call it a car chase, it’s more of an everything chase.

Alright, alright, alright, enough about “What’s up, Doc?”. I said that Kahnedy was rare these days, but there’s one thing that’s certainly much rarer – and that’s Madeline Kahn herself.

Madeline died in 1999, right before the new millennium, just months after being diagnosed with ovarian cancer. This picture of her with Kermit the Frog really underscores how I feel when talking about her legacy; smitten, humbled…and green.

There’s nothing we can do to bring Madeline back, but we can agree to discourage nonsensical bullshit like “women aren’t funny!”. It’s not only incorrect, it’s outright stupid. Sorry Hitchens, you got this one and the Iraq war totally wrong.

Let’s try to restore the spirit of Madeline and the spirit of Kahnedy by elevating the new generation of female comedy actresses. Maybe if we really focus on inspiring women and allowing them to be as funny as we all know they can be, we can reincarnate Madeline Kahn in some sense. In fact, I’d argue that it’s already happened… 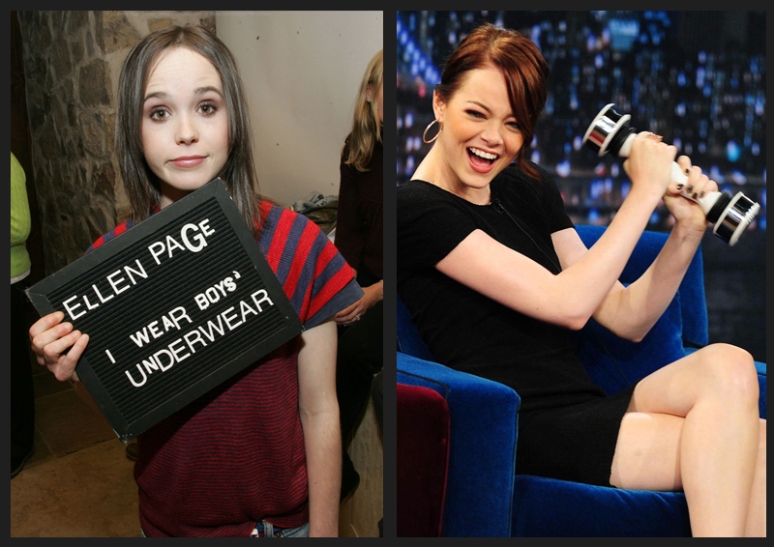 Funny, beautiful, smart, and hardworking…women like these embody everything admirable that Madeline Kahn had to offer. Let’s face it, if women ran the world our sense of humour about ourselves and each other would be drastically improved.

Girls, ladies, women, go out there and revel in some Kahnedy. Don’t let a single jealous little boy tell you that your humour isn’t ‘good enough’ or that your female comic senses are somehow not as sharp as its male equivalents. Instead, take your queues from the goddesses that machete’d through the jungle ahead of you without a single look back. Joke like clowns, giggle like drunkards, live like Madeline. Improve life by enjoying it, pointing at it, spouting a line, and laughing hysterically.