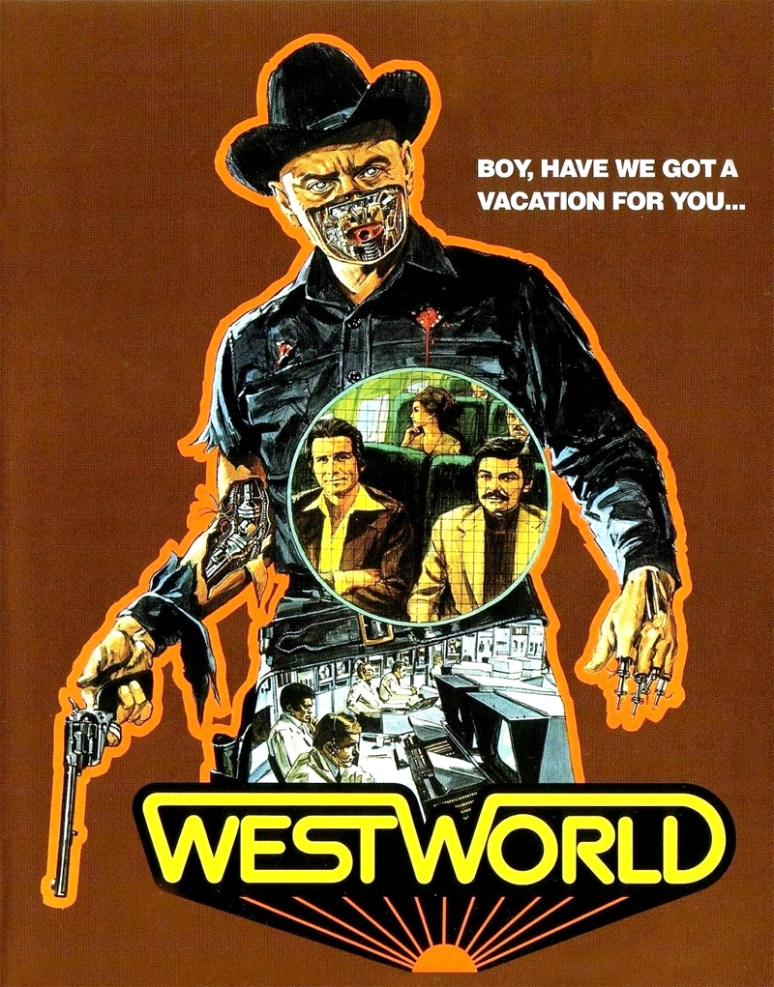 Boy have I got a review for you!

Movie critics typically review movies that have recently been released. That’s because there’s obviously no point in directing their reader’s attention to a film that came out thirty years ago. They might as well write about their feelings on overanalysed concepts like death, homosexuality, and censorship. Wait a second, I’ve written about all those things!

Well, I’m different from other movie critics in one very important way: I’m not a movie critic! I’m just a nutter who knows how to use a keyboard…

…so I don’t feel bound by those rules. The movie I’ll review for you today was made way back in the year nineteen-hundred and seventy-three, but I only saw it just recently. It’s Michael Crichton’s Westworld!

I’ve been something of a mini-fan of Michael Crichton for some time now, can you guess why?

Yeah, I’ll admit that is what brought him to my attention. Not long after I saw the film, I tracked down the novel to see how they compared. Then I read the sequel, The Lost World, and continued on from there with some of his other books –  like Congo and Sphere.

I always thought Michael Crichton was a truly unique writer. He had a strong passion for science fiction, and indeed science itself. Almost all of his novels have been adapted into films or mini-series’, and I think that’s because they translate so well. The premises he cooked up can very easily be adapted into screenplays. He loved to dive into discussions of scientific consequences – it was kind of his thing, making him a modern Mary Shelley. Jurassic Park is undeniably his most famous work, but did you know that it’s actually a self-inflicted remake?

I didn’t, but I found out quite recently. There was a whole other side to Michael Crichton that, surprisingly, I never knew about; he was also a film director. I don’t just mean that he tried it once for a kick, he directed seven movies! That’s more than Paul Thomas Anderson and the same amount as Quentin Tarantino.

“A robot malfunction creates havoc and terror for unsuspecting vacationers at a futuristic, adult-themed amusement park.”

Replace the robots with dinosaurs and you’d essentially have….Jurassic Park. It’s the same concept! Well, sort of..see Jurassic Park focused very heavily on genetic experimentation and cloning. It centered around the question of humanities control of nature and chaos vs. determinism. Westworld, however, features the much-loved science fiction theme of total automation. What happens when you leave everything, even the building of machines, up to machines?

Alright, I’ll stop comparing it to Jurassic Park and simply judge it on its own merits…

I really liked this film. It’s photographed in a very campy 70’s way, with very flat shots and smooth pans in favour of cranes and dolly’s, but I felt like that was intentional. The main characters are, after all, attempting to relive the “old west”. It makes sense, therefore, to shoot it like an episode of Bonanza. In fact everything about it reminds me of that; the writing, the acting, and the music. So, if you’re a fan of that style, then this will fit your sensibilities like a glove.

The other half of Westworld is very similar in tone to The Terminator. Halfway through, the main character is pursued by a lethal glitchy robot, called The Gunslinger, who has apparently selected him as his nemesis. Naturally The Terminator was made eleven years after Westworld, so the inspiration is the other way around.

Speaking of inspiration, is anyone here a Doctor Who fan? I know at least one of you is, and this part of the plot should therefore ring a little bell for you.

In the the third episode of Doctor Who‘s seventh season, entitled A Town Called Mercy, the characters encounter a cyborg cowboy named The Gunslinger. Inspired much? The creators of Doctor Who are clearly science fiction nerds who know their stuff.

This single movie has inspired a lot more pop-culture than I ever realised, even effecting the writers of The Simpsons…

…who’s episode Itchy and Scratchy Land saw the family travel to an automated Itchy & Scratchy themed amusement park which breaks down halfway through and turns deadly. They even quote many of the same lines.

There seemed to be more than just one theme being juggled at a time in this movie. Whilst all the cautionary science-fiction points are being made, there is also an alternate storyline about the motivations of the two main characters. They’re travelling to this world in order to escape the undesirable cocktail of misery and boredom that they experience in their day-to-day lives. You get the sense that they become addicted to it and, given no financial restrictions, would happily live in this fantasy world for the rest of their days. The problem is that it isn’t real, but the movie forces you to question whether the objective illegitimate nature of something even matters when your subjective experience is so convincing.

The cast will most likely be unknown to you, but you may turn up your ears at names like Yul Brynner and James Brolin. Yes, that’s a young James Brolin, father of Josh Brolin – who bears a striking resemblence to Christian Bale. 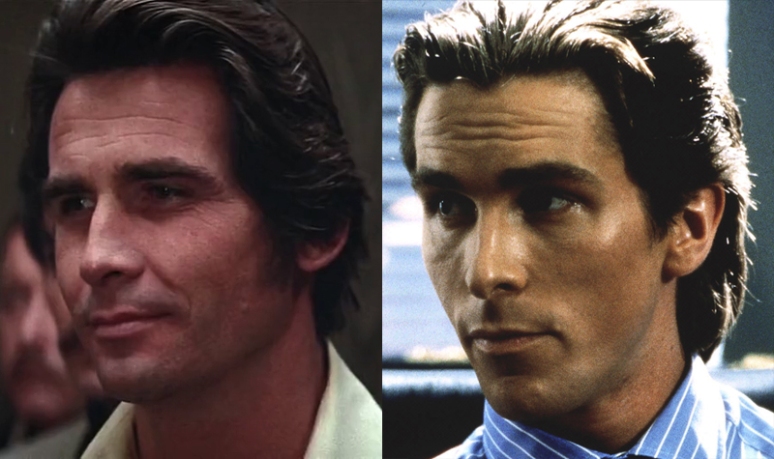 Isn’t that incredible? I guess reincarnation really is a thing…well, sort of. James Brolin is still alive, so it doesn’t really count.

I seriously think everyone needs to see this movie, even if it’s just as a little film-history lesson. It’s a classic masterpiece of scientific admonition. I appeal to you as a fellow ignoramus, I had never seen this movie until now but I’m so glad I did! Check out this trailer if you’re still unconvinced: