So this morning I awoke to the news that Philip Seymour Hoffman, one of the most watchable film and stage actors of the last 20 years, is officially announced dead.

Usually when this sort of thing happens, a B-listed celebrity is rocketed up to the A-list post-mortem. It’s like a painters work becoming famous only after their death. It happened in the case of Heath Ledger and Paul Walker. Was anyone, besides 14 year old fangirls, gagging over Heath Ledgers combined career? Sure, 2 of his last films were major Oscar and box office hits, but was anyone other than your teenage sister singing the praises of A Knights Tale and 10 Things I Hate About You. Who the fuck even knew Paul Walkers’ name before he died? I sure didn’t, and the only film series he was ever known for stacked up a combined average of 50% on rotten tomatoes. No one gave a toss about him until he left this world in such a spectacular manner.

A similar thing will likely happen to Hoffman. The mainstream world of pop culture will catch on in a torrent of postmortem appreciation. “I loved Philip Seymour Hoffman!”, “Oh my god, he was like totes amaze!” “#bestactorever!”. While I do believe it’s better late than never for people to start appreciating his worth, it continues to baffle me that it requires something as traumatic as death for the general public to take notice.

The difference here is that anyone with even a meagre interest in acting for stage and screen will already be acquainted with and enamoured by this man. He was, hand on heart, one of the greats. He had very few starring roles in movies, and typically played a very important second fiddle. Never-the-less, there is a saying I want you to memorise. It is as true as the skye is blue, and it goes like this:

“There is no such thing as a bad Philip Seymour Hoffman film!”

There are some great ones, good ones, and not so good ones…but never a truly bad one. Check his IMDB page if you wish. The worst you’ll find is likely The Invention of Lying and Along Came Polly, which aren’t that bad when all is said and done. No, he was a pearl in a sometimes rotten clam, but always a positive force. You were damn lucky if you could score Philip Seymour Hoffman in your movie. It was like having an extra life in a Mario game. The whole movie could literally fall apart around him, and yet he was always enough to keep you watching.

So, for those of you out there who want to tweet or Facebook (or, um…blog) about this tragedy and gush over how important he was to your moviegoing experience…let’s all put our money where our mouth is. Here is a list of the top Philip Seymour Hoffman films that I think everyone should watch in chronological order.

In his first truly major breakthrough, Philip played what was essentially a villain role. As a spoiled rich prep-school student who threatens to undermine the main character’s academic future, he made his mark in the world of oscar nominated cinema and caught the eye of one yet-to-make-his-debut filmmaker.

Paul Thomas Anderson, in his commentary track to Sydney, recalls first seeing Hoffman poking his serpentine tongue at Chris O’Donnell and being completely captivated, stating “I had to have this kid in my movies!”. His squinted snobbish expression and eerie croaking voice provides the story with a much needed and exceptionally hateful antagonist. You can’t help but despise him!

Enough about where Paul Thomas Anderson first saw him, where did I first see him? Naturally it was in Twister! As the clumsy, eccentric, and probably perpetually high hippie Dustin, he laughed his way maniacally onto the big screen in a summer blockbuster that likely served his career enormously. He is by far the funniest thing in the film, and a great comic relief in general.

I love boogie nights so much! Not having seen it is like not having had sex. I can’t possibly describe to you how good it is…you just have to experience it for yourself.

My only criticism of an essentially flawless film is that Philip Seymour Hoffman isn’t in it enough. He easily plays one of the best characters, Scotty J. ; someone you laugh at, ridicule, love, pity, and then feel immensely sorry for. Philip took this tragic clown with precious little screen time and turned him into a kitten you just want to squeeze some love into. I would have been the first in line to see a Scotty spinoff of some kind. 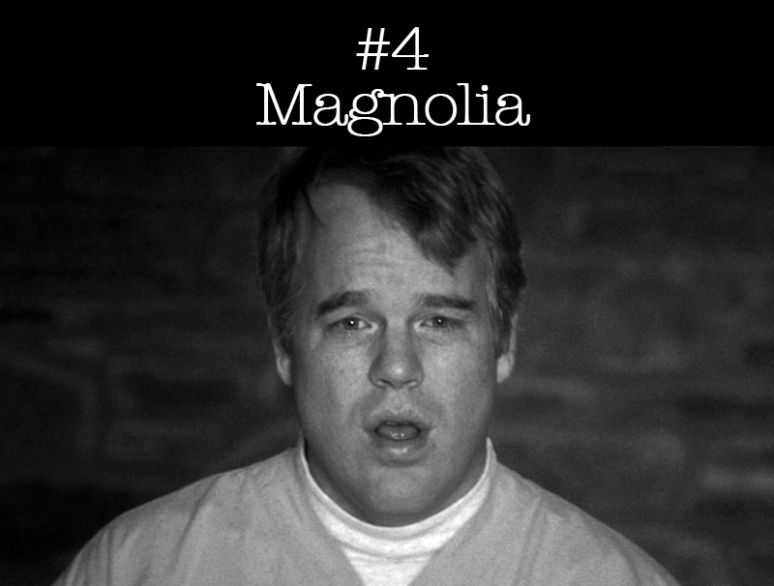 There is a surprisingly large amount of people out there who don’t like Magnolia. I happen to love it, but regardless of whether it suits  your taste or not…the one thing you cannot fault is the acting. There are so many great actors packed into this movie that Phil Hoffman tends to get overlooked. I think he’s phenomenal and totally believable as a stay-in male nurse with inner anxieties and frustrations that just lightly touch the surface.

Now this is just a great film anyway, and just made all the better by having Philip play a very interesting moral antagonist. He’s not  a villain per se, because he is attempting to do the right thing by tracking down his missing friend. On account of Matt Damon’s increasingly lethal Tom Ripley being the main character, however, Hoffman basically becomes our “bad guy”.

To me it feels like he’ re-channeling his spoiled prep-school character from Scent of a Woman. What do you think?

This one isn’t ambiguous in the slightest, Hoffman goes plain and straight out evil. Punch-Drunk Love is one of my favourite romantic comedies of all time, as I noted here. I stated in that particular rant that it’s an adaptation of Popeye the Sailor Man, which would make Adam Sandler into Popeye, Emily Watson into Olive Oyl, and Philip Seymour Hoffman into…Bluto.

Everyone should watch this film for 2 simple reasons:

1. To see Hoffman do a dead-on unflinching impression of Truman Capote.

2. To see the performance that won him the Academy Award for Best Actor 2006.

This is another one that you simply cannot miss. The story’s fantastic. Phil Hoffman and Ethan Hawke play brothers who decide to rob their own parent’s jewellery store. As you might have guessed, things go from bad to worse as they attempt to dig themselves out of an ever-deepening hole. This movie is so much fun, Hoffman or not…but you do get Hoffman…so you win either way.

Two words; Charlie Kaufman! Charlie Kaufman the writer…and Charlie Kaufman the director. If you know the meaning of this then you will have some idea what to expect with this film. It’s certainly far more of an art piece than it is an entertainment film, but there is something about Kaufman’s absurd “metaphor-actualisation” synthesis that’s oddly appealing. I would recommend this film largely on Hoffman’s ability to act out half a lifetime on screen, but don’t go in with your action film hat on.

This is a film that I liked far more than I thought I was going to. I think there needs to be a lot more films about the egregious nature of the child rape revelations from within the Catholic church and I’m very thankful to John Patrick Shanley, Amy Adams, Meryl Streep, and Philip Seymour Hoffman for daring to discuss it. Obviously this movie has more to do with the shaking of faith, belief versus evidence, and emotion versus fact. Still, it’s a perfectly well poised “issues” film.

Most people will see this movie for either Ryan Gosling or George Clooney. I have to say that I went in thinking it was going to be West Wing-esque, and possibly even quite dull. I was amazed at just how riveting it was. This movie is so much darker than you think it’s going to be. Hoffman does a great rendition of a wise old political strategist butting heads with fresh young talent. See it, and stick with it, you won’t be disappointed.

A surprisingly similar role, but hey…if it ain’t broke don’t fix it, right?

Moneyball is a great film with nothing but dialogue, anger, and competition behind the scenes of baseball. It’s about the desperate search for truth and new tactics in a  world of lazy tradition and ego. Who better to exemplify that lazy tradition and ego than one of this generations finest actors? The picture really tells you all you need to know about his character.

And so we fittingly end with The Master (and awkwardly land on the number 13)! If you haven’t seen the Master, it’s your duty to split for a bright big BluRay copy right now.

Based (unofficially) on the rise of L. Ron Hubbard and the Church of Scientology, The Master tells the story of an alcoholic World War II veteran who meets the charismatic leader of a growing cult. The two become best friends and begin to affect each others philosophies. The beautiful 70mm cinematography alone envelops you in a strange hyperreal vintage world, but add to that the uniqueness of Paul Thomas Anderson’s writing and the towering presence that is Philip Seymour Hoffman…and it will at the very least put you in a state of awe.

I suppose that’s all there is to say.; A man I never knew, but through his work. Clearly beloved by many both before and after his death. Special mentions go to The Big Lebowsky, Almost Famous, Love Liza, Cold Mountain, Mission Impossible III, Charlie Wilson’s War, Mary and Max, The Boat That Rocked, The Hunger Games: Catching Fire, and of course Jack Goes Boating which he starred in and directed.

I will leave you with a little favourite clip of mine. It’s from the making of Magnolia. I have no doubt that this man worked extremely hard at his craft, but it’s also deliciously good fun to see him joking around with one of his directors…merely as a friend.

So long, thank you for everything.