Jack of all trades

Some of my favourite cathartic moments in life are the ones when I discover a wonderful new documentary film, which is just what I did last week. I had heard about Tim’s Vermeer for a little while now, but didn’t know much about it beyond the fact that it centred around 17th century art.

That’s a terrible description, so ignore IMDB and let me convince you that you need to see this one!

However, for those of you out there who have no idea who these two grinners are, it’s going to be a tougher sell and harder battle to win. Here we go…

This isn’t a regular documentary about paintings. It’s not Tim, Penn, and Teller walking through art galleries and diving into the history of Johannes Vermeer. In fact, the life and legacy of Johannes Vermeer is hardly discussed. This is a film about a possible uncovering of how one of the worlds most successful and celebrated painters…might not have been a painter at all. Perhaps, he instead was the actual inventor of the world’s first camera.

I’m not sure if I want to reveal much more for fear of ruining your viewing experience, but basically:

Tim Jenison thinks he may have uncovered a trick used by this particular unique painter in order to create photo-realistic paintings in the 17th century. His goal by the end of the documentary is to use his ‘rediscovered’ Vermeerian invention to recreate (perfectly!) a Vermeer painting without the aid of any modern technology or art techniques. Oh, one more thing; Tim’s not a painter…at all! Still, he wants to paint one of these: 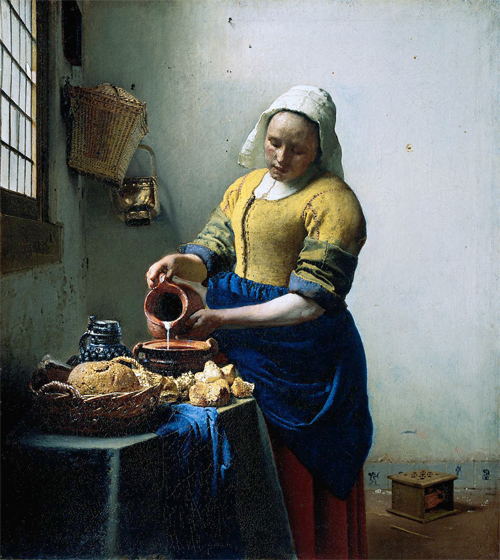 You may be tempted to google “Johannes Vermeer” or “Tim Jenison” and try to figure out if he succeeds and if so…how, but please don’t! Do not take cheap steps! Instead satisfy your curiosity and confusion by commissioning a copy of Tim’s Vermeer on DVD, BluRay, Netflix, Torrent…or perhaps you can get your lazy post-Renaissance ass off the couch and actually watch it at the cinema.

Yes, you can in fact watch a documentary at the cinema. It seems unusual these days, but The Act of Killing, We Steal Secrets, and Twenty Feet from Stardom are just three examples of doccos recently screened at popular local cinema chains here in Australia. If you’re in another country then…I don’t know how much of an option it is for you, but you never know.

It’s a fact that Village and Palace cinemas are showing Tim’s Vermeer either now or in the very near future all across Australia. It’s worth the $20.

There is a deeper point to be made here, though. As Tim continues in his quest, he picks up skills and knowledge from an enormous amount of disciplines. He learns a language, uses and modifies a lathe, utilises countless new software programs, mixes paint, creates lenses, and builds a studio from scratch all in the single effort of finishing a painting. He effectively demonstrates the classic traits of a Renaissance man, impressing us with the recognisable spectre of DaVinci himself. This is not because he’s a born natural in all these fields, but because he bothers to attempt them.

Tv Shows like American Idol, coupled with a modern therapists focus on the importance of self esteem and the id, seem to have left us thinking that there’s no ladder between “talented” and “inept”. Our attitude to phenomena like a well developed singing voice, where “you either have it or you don’t”, has been extended to just about anything artistic. It’s a lie! You may or may not be able to learn how to sing, but you can learn how to write and play music. You can learn how to build, construct, read, write, speak, draw…and paint. Yes, you can learn how to paint entirely from scratch. It takes time, dedication, and patience, but it’s completely achievable for everyone. Some merely have a steeper hill to climb than others. The Renaissance man is not an extinct breed, he’s just the product of a time when people understood that talent was the result of effort and not just genetics. Therefore, people were encouraged to try several new things instead of simply uncovering their “one true gift”.

Here’s the bombshell; you may not have a gift! Everyone doesn’t have a knack for at least one thing. You may be born as an empty slate. Sad, but quite possibly true. The good news, however, is that you can develop a talent if you work hard at it. In fact, with enough work, you can develop several.

There’s an old saying about this that people only ever remember the first two-thirds of.

Jack of all trades

but often better than a master of one.